LGBTQ+ couples have had to overcome societal and legal prejudices to live open and full lives. It was only 6 years ago that the United States Supreme Court legalized same-sex marriage in all 50 states. The joyful love between each couple and their struggle for equality and dignity was an inspiration to me as I worked with them to manifest their rings. Elaina Designs is proud to stand with the LGBTQ+ community any day of the year, but June is Pride month and I wanted to share these photos of my happy clients and their beautiful rings, each created in a separate decade. 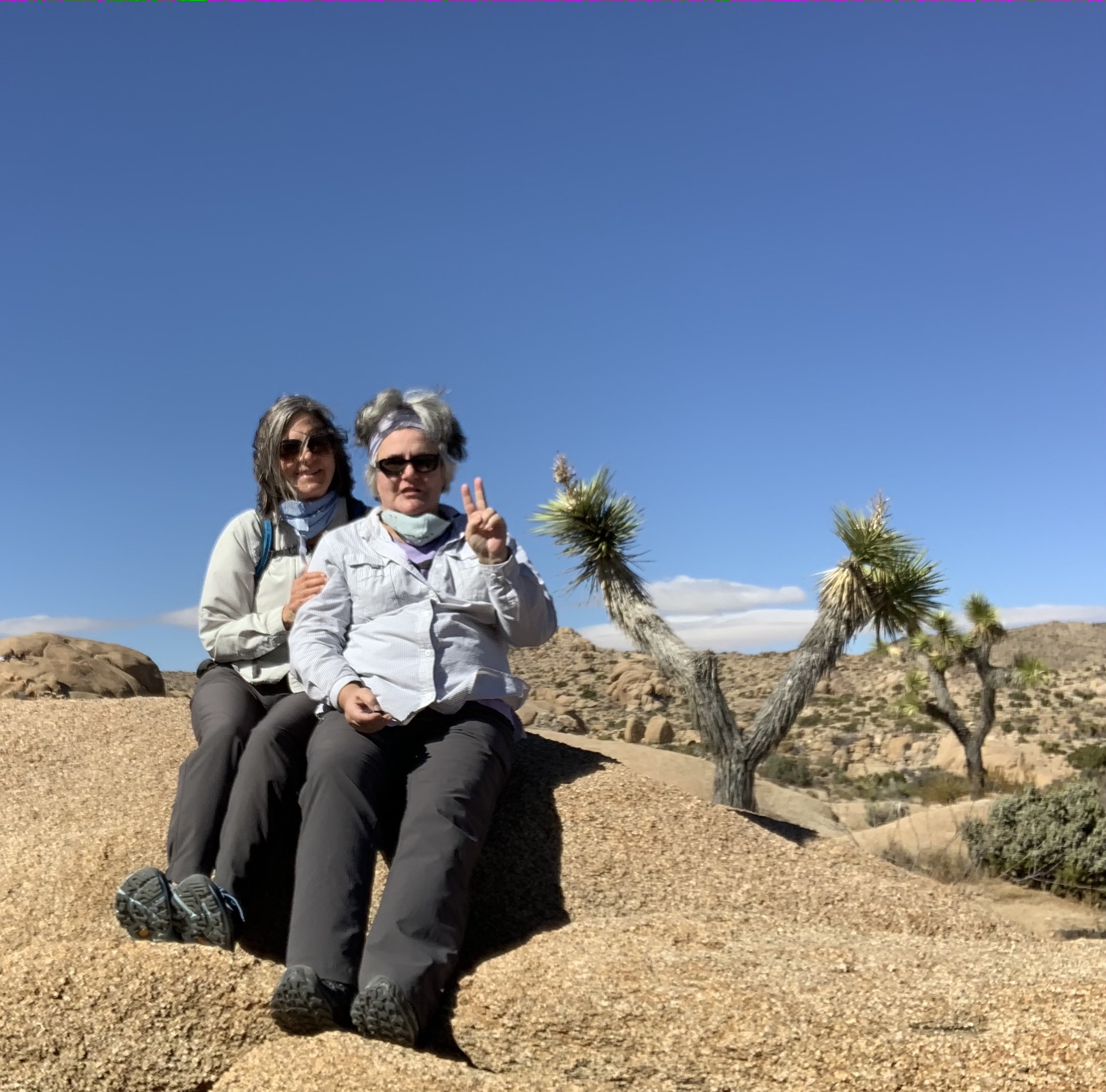 Kyra and Constance on a recent visit to Joshua Tree National Park. They were married in 2013. 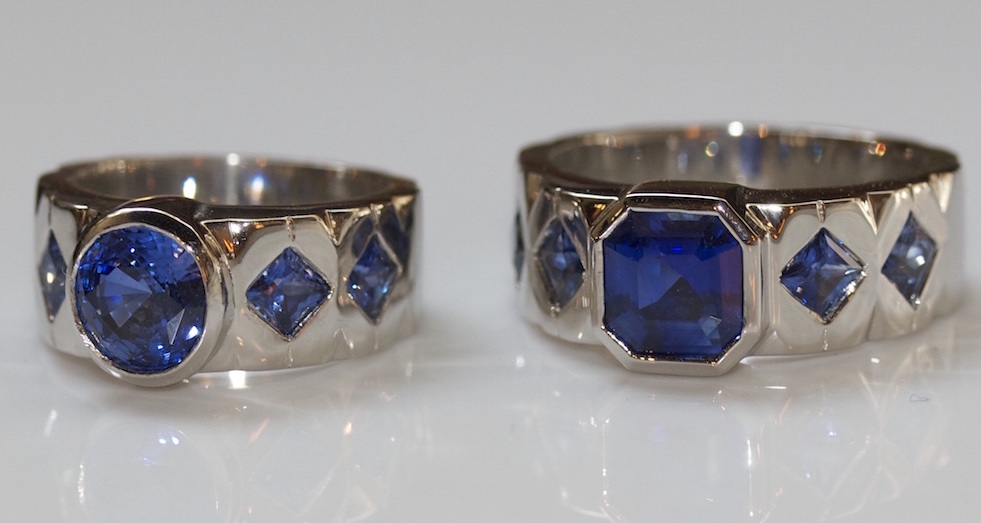 They wanted bold and durable rings that would suit their active lifestyle of sailing and world travel. Sapphire is their favorite stone and I found these stunning natural color Ceylon blue Sapphires that we set in a knotched honeycomb pattern in Palladium, a durable alloy of Platinum. 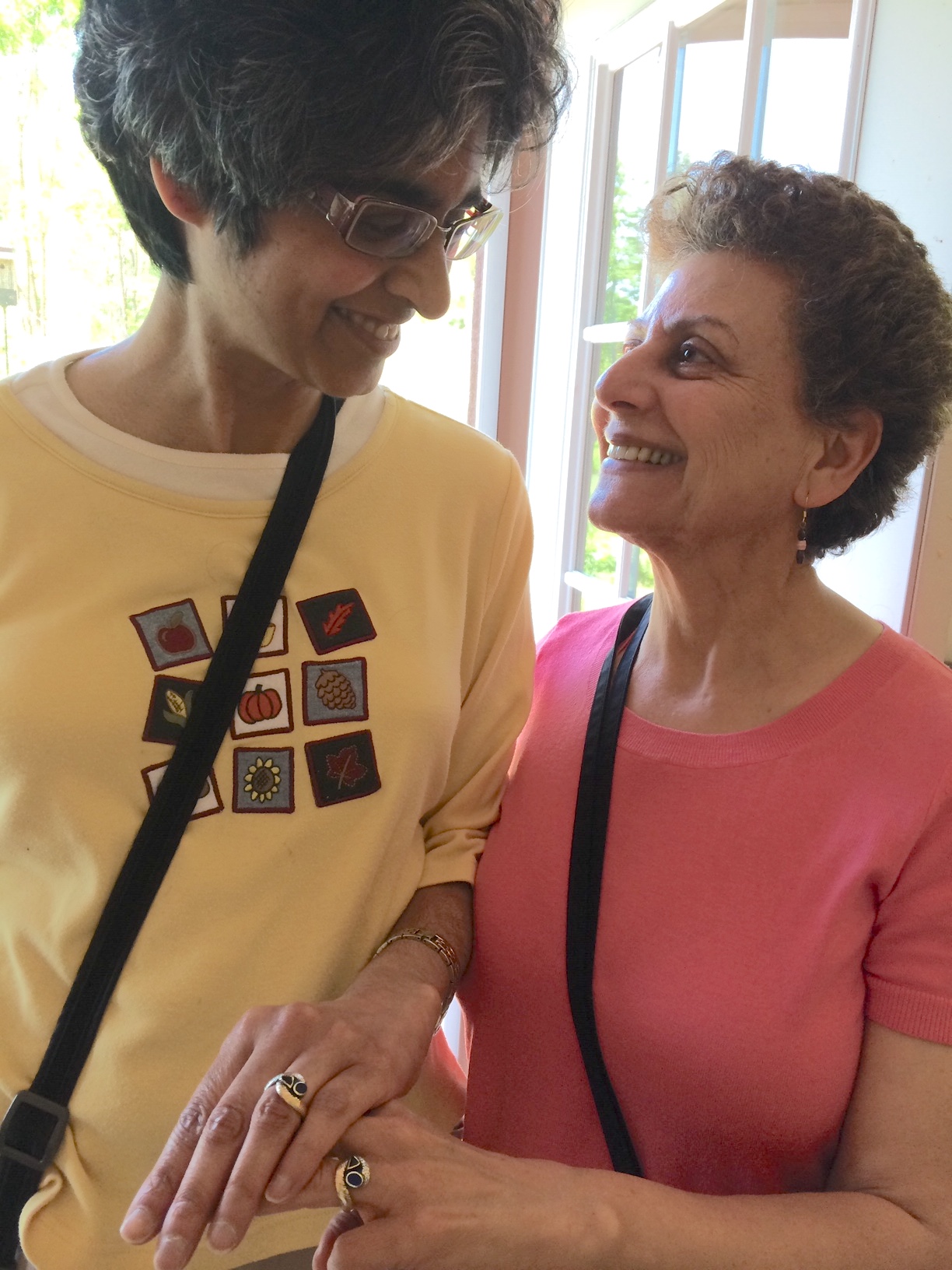 Gita and Lourdes were married in 2003. 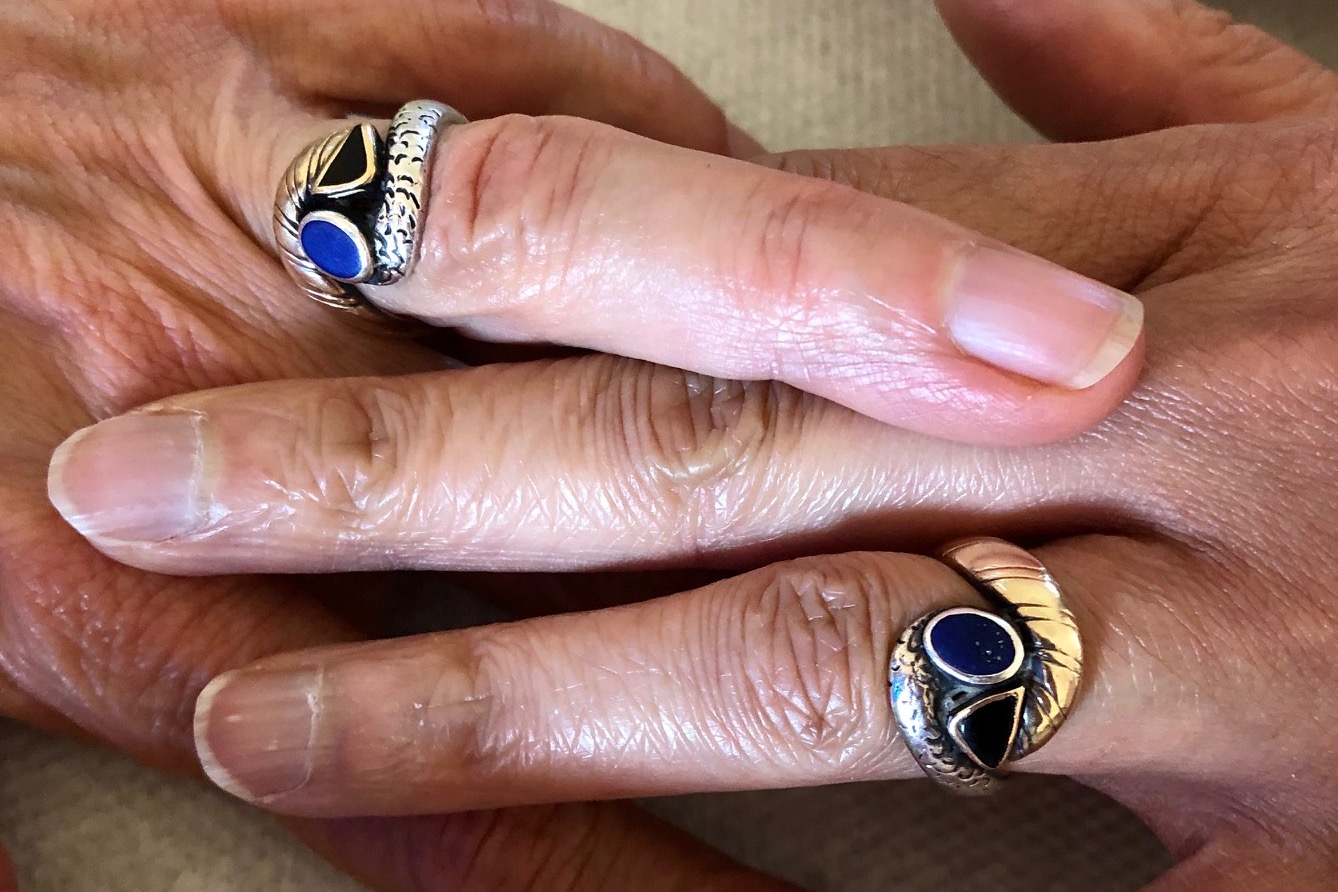 The couple wanted to represent the alchemical marriage between white metal and gold and incorporate the snake, an ancient symbol of healing. The rings beautifully feature intertwining snakes, one in 14K white and one in 14K yellow gold with distinctive hand engraved patterns, and nestling heads of Lapis and Black Onyx. 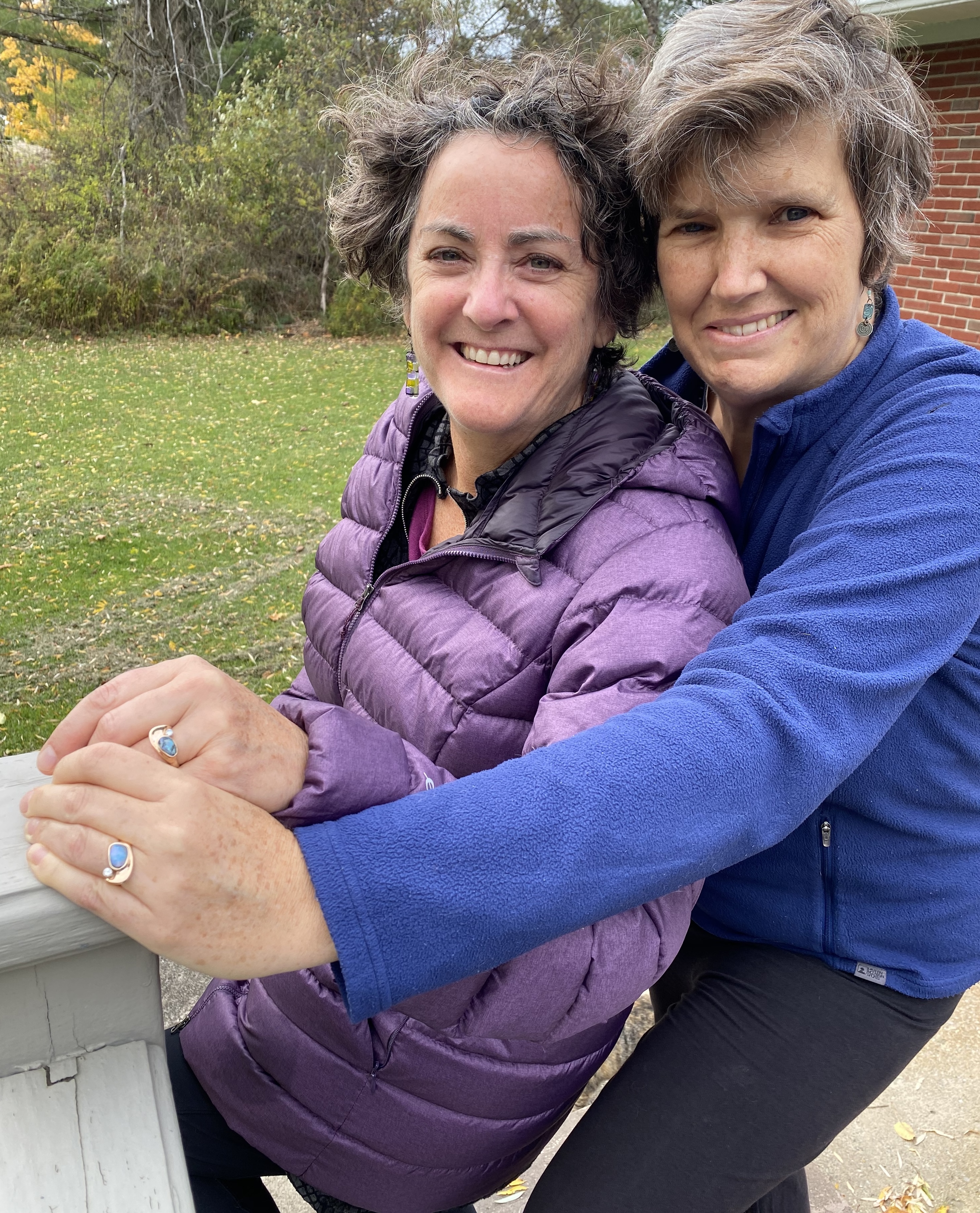 Sally and Lisa celebrated their 17 year partnership by getting married in 2020. 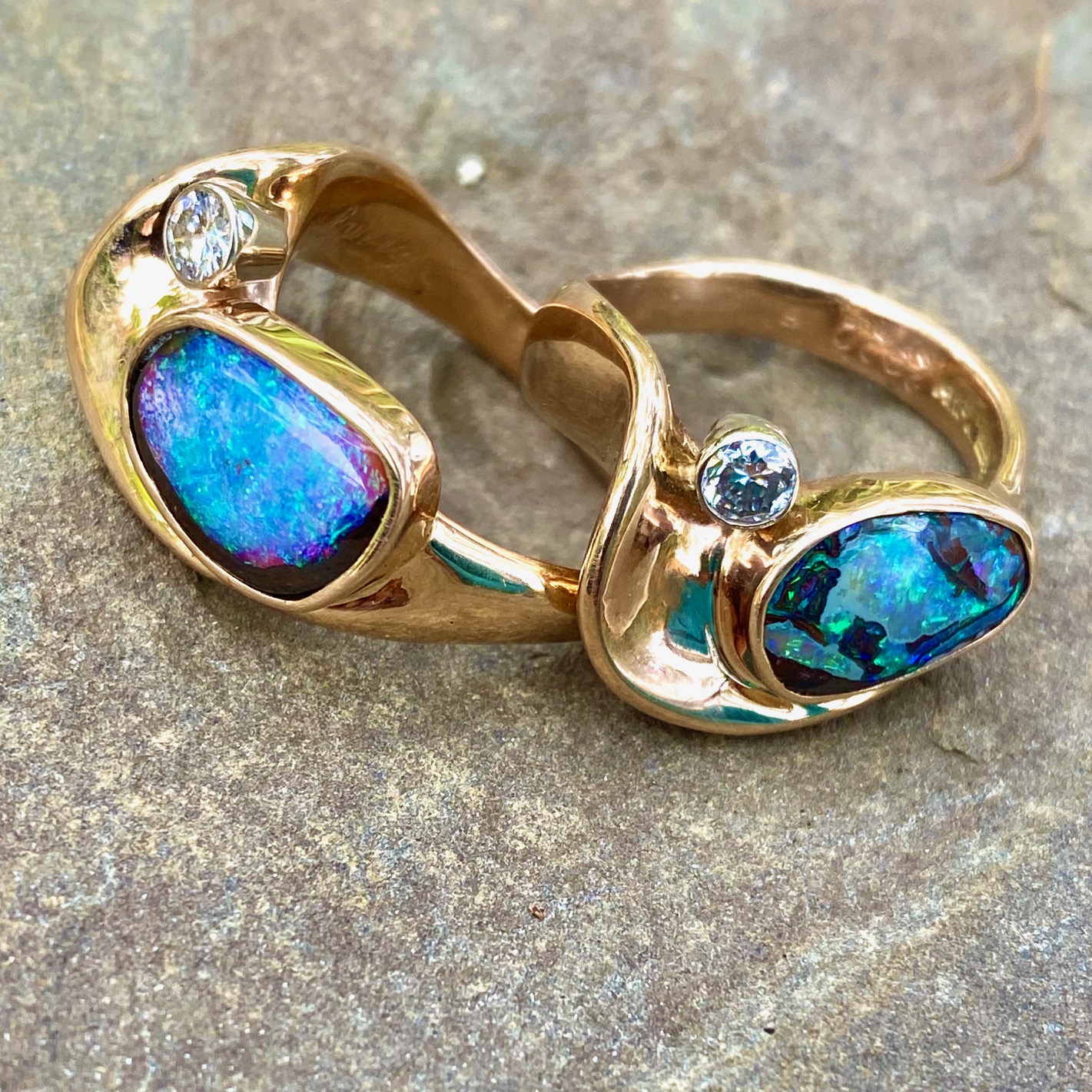 Active in their gardens, hiking and biking, the sky-earth patterning in these Boulder Opals resonated with the couple. The Diamonds were once in a pair of earrings given to them from Lisa’s Mom — a symbol of family love and blessings. The fluid design was cast from the interior curves of an ocean-worn seashell. 14K yellow (left), 14K rose (right).

“No union is more profound than marriage, for it embodies the highest ideals of love, fidelity, devotion, sacrifice, and family. In forming a marital union, two people become something greater than once they were. As some of the petitioners in these cases demonstrate, marriage embodies a love that may endure even past death. It would misunderstand these men and women to say they disrespect the idea of marriage. Their plea is that they do respect it, respect it so deeply that they seek to find its fulfillment for themselves. Their hope is not to be condemned to live in loneliness, excluded from one of civilization’s oldest institutions.  They ask for equal dignity in the eyes of the law. The Constitution grants them that right.” — quote from Obergefell vs. Hodges Supreme Court decision, 2015.